History of the Parish

St. John’s Mission formed in 1892 when interested West Seattle residents persuaded the rector of Seattle’s Trinity Parish to cross the bay and provide Episcopal services in the local one-room school. In 1901, St. John’s erected its first church building; in 1907 St. John’s became a parish. Newspaper accounts state that the parish was debt free, self-supporting, and active in community affairs. This was the year West Seattle was annexed by Seattle. 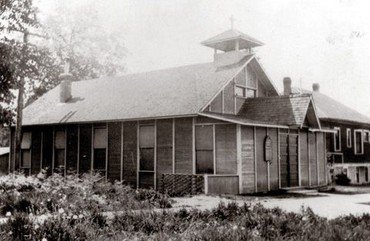 In 1922, St. John’s purchased its present site from the congregation of Holy Rosary Catholic Church when that church moved to another site. The much-beloved “Old Brown Church”, built in 1909, served us well until the 1960s. 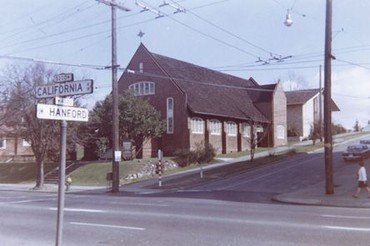 Through the 1920s, St. John’s made great efforts to grow and maintain its place in the community. The prosperity of this period was largely wiped out by the 1929 stock market crash. The Depression years and the war years of the 1940s were difficult for all churches, and some folded. St. John’s was blessed with excellent leadership and a strong-willed congregation and we weathered the storms.

In 1945, that will to survive was again tested when the school board, needing to expand the high school, attempted to have our property condemned and purchased for a “ridiculously low” price, much too low to move and rebuild. The school board met with determined resistance, and we are still here. In the 1990s, we again negotiated with the West Seattle High School about its expansion, under much less adversarial circumstances. The result was fair compensation for property lost and parking improvements, including a shared-use agreement for their parking lot. We now have plenty of parking.

The growth of West Seattle in the 1950s and 1960s was also reflected in the church. In the early 1950s, we presented a confirmation class of 97 people, our largest ever. This was a period of building and expansion. A rectory bought in 1955 provided a substantial profit for investment when sold in 1988. A new Parish Hall was completed in 1957, and a new church in 1964. Also in the 1960s, we purchased the “Little White House” adjacent to our property and used it for outreach, as emergency housing. This building was lost to the high school expansion, and compensation was used to build a house for Habitat for Humanity.

In 1964, our name was officially changed to St. John the Baptist Episcopal Church. This new name reduced confusion with other churches called St. John’s and made clear our relationship with our patron saint. However, we have been confused with the Baptists ever since, which has led to many interesting conversations.

The 1960s and 1970s were a period of considerable social change in our country, and St. John’s did not lack for strong and differing opinions. Add to this the introduction of a new prayer book and we experienced plenty of turmoil within the church. Again, the blessing of strong leadership allowed us to focus on the greater goals, respect each other’s opinions, and avoid serious trauma. Despite the turmoil, we were able to strengthen our participation in community and diocesan affairs. We sponsored our first refugee family toward the end of this time. 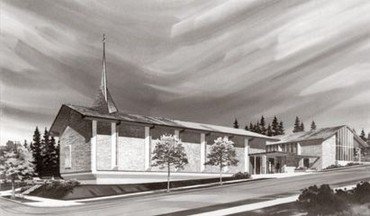 Through the years, we have experienced a gradual evolution of liturgical style, from morning prayer every Sunday to Eucharist once a month, then three times per month; since the 1970s, we celebrate Eucharist every Sunday. Also during this time, because we had several rectors who were excellent musicians, music was established, and remains, an important element in our worship.

In 1985, we transformed a portion of our property into a memorial garden known as The Churchyard for the interment of ashes and as a place for quiet reflection. Adjacent to The Churchyard, our long-held dream of having a church bell was realized in 1992 with the christening of Julian which is rung before each service.

In 2004, a building project reconfigured the office and classroom space, giving us a Prayer Room, Library, fully-accessible restroom, and a Community Room used by such groups as A.A.  We also added substantially improved accessibility with an elevator and a new stairway connecting the church with the Parish Hall.

In 2012, The Rev. Peter DeVeau answered a call to Kansas City. During a time of transition, we had an interim priest and two priests-in-charge, one of whom took a much-deserved early retirement and the other moved on to another great adventure.

In 2017, we called The Rev. Kate E. Wesch to be our next rector. This is currently a time of tremendous growth and excitment in the parish as we engage more fully with our common worship, develop opportunities for formation and spiritual growth, and engage in service and outreach within our community.

St. John’s church consists of two buildings. The Nave was built in 1964 on the western portion of the property. The Parish Hall was constructed earlier, in 1957, and is a two-story structure. These two buildings are joined by a hallway between the Narthex and the lower level of the Parish Hall and by a wide stairway to the upper level. This structure also contains an elevator and a fully-accessible restroom. Except for the older restrooms, the entire building is wheel chair accessible, including the altar rail.

The Nave seats more than 230 people. The acoustics are very good, and many groups have performed here. The roof is supported by arched beams representing the YOKE — man’s labor united in God’s strength — “Take my yoke upon you, and learn of me …”  Matthew 11:29. A bas-relief by the renowned sculptor Everett DuPen, covering the sanctuary wall, represents departed Christian souls ascending to God’s Kingdom. The sculpture is divided at the center by the traditional hands and flame representing the Holy Spirit. Suspended over the altar is a copper sculpture of the ascending Christ, also by Everett DuPen. Natural light  enters through a skylight at the base of the steeple above the alter, as well as clear glass windows set high in the walls and narrow, recessed stained glass windows rising floor to ceiling.

The choir loft is at the rear of the Nave above the Narthex and contains the pipes and console for the 1949 Estey organ. A small three-stop portable pipe organ sits at the front of the Nave beside an excellent Kawai 7-foot grand piano. This organ is owned by the Seattle Chapter of the American Guild of Organists and is sometimes removed for performances or teaching purposes

Across the Narthex and within sight of the Nave is a nursery for children too young to be in school and too active to be in church. Also off the Narthex is our library.  Between the nursery and library are a hallway and a wide staircase. The hallway leads to the lower level of the Parish Hall building which contains the church offices, classrooms, work space for several ministries, and the Prayer Room, which is a more intimate space for services or meetings.

The stairs lead to the choir loft and to the Parish Hall, which is an open space that  holds up to 429 people. The Parish Hall has a carpeted floor, walls of windows on two sides, and a cathedral ceiling. The room includes a piano, sound system, projector, and screen. The space accommodates everything from wedding receptions to our Christmas Festival and the Rummage Sale. At one end of the hall is the Youth Room furnished with lounge furniture and a pool table. Next to the Youth Room is a large and functional commercial-style kitchen. At the other end of the Parish Hall, a door leads to restrooms and the Community Room which is meeting space used by a variety of community groups.

The church is situated on a west-facing hillside and is bordered by California Avenue SW on the west (a major arterial), SW Hanford Street on the south, and 42nd Avenue SW on the east side. Our neighbor to the north is West Seattle High School. Our main entrance is on the north side, with a small parking lot, Julian (our church bell), and The Churchyard where the ashes of many of our parishioners are interred. The planting strip on the east side contains raised beds for a gardening project. The south side is a work in progress, with a labyrinth being constructed on land previously covered by English ivy. Landscaping on the west side contains a number of large trees and shrubbery, as do other areas around the buildings.